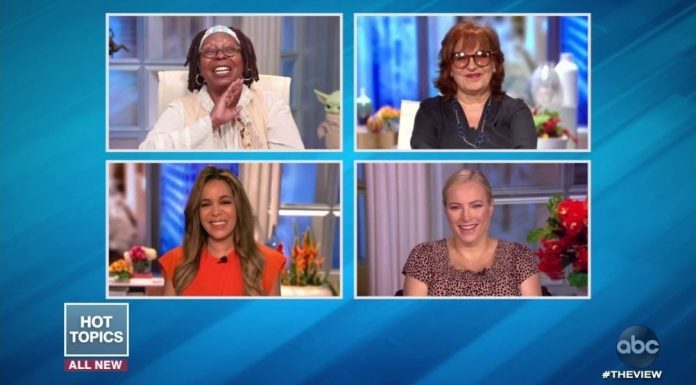 The harpies on The View went into meltdown mode.

The reactions of head harpies Whoopi Goldberg and Sunny Hostin especially were priceless.

Because all hell broke loose on The View after one guest called out a radical Left policy and sent show hosts into a tailspin.

The supposedly fluffy morning talk show features unhinged leftists with a moderate voice or two thrown in to occasionally push back so viewers aren’t bored completely to death.

The reality is The View is one of the most hateful shows in America.

And a recent guest helped prove it.

It happened when ESPN sideline reporter Michele Tafoya, a moderate Republican, appeared on the show and pushed back against the neo-Marxist philosophy of Critical Race Theory.

The discussion came about when discussing the gubernatorial race in Virginia where Republican Glenn Youngkin newcomer took down former governor Terry McAuliffe.

The radical doctrine of CRT came up, and co-host Joy Behar called it “culture war B.S.”

But the parents of Virginia obviously disagreed.

Tafoya pointed out that her own children were segregated into affinity groups, which is happening in both K-12 and college.

Tafoya said, “Why are we even teaching that the color of the skin matters? Because to me, what matters is your character and your values.”

That’s when co-hosts Whoopi Goldberg and Sunny Hostin pushed the talking point that CRT is simultaneously not being taught, and also it is being taught and it’s simply real American history.

Goldberg made some insane reference to lynchings, then Hostin ranted:

“Now the message is white parents are being ignored when they complain their children aren’t comfortable learning about racism. That their white children don’t want to be uncomfortable. Well, let me tell you something. Black kids around this country are stigmatized and are made to feel uncomfortable every single day, and I don’t think it’s too much to ask white parents to allow their children to learn about the very real history in this country that is still very prevalent, the systemic racism that is still very prevalent in our country. What is so wrong with learning the real history? And I’m sorry if little white kids feel a little uncomfortable.”

First of all, it’s borderline sociopathic for Hostin to say she doesn’t care about “little white kids” feeling bad.

Second, CRT has nothing to do with teaching “real history” – the horrors of slavery and Jim Crow are taught in every single public and private school in the country.

CRT is about seeping Marxist thought into education at every level.

The Left is getting called out for it, and now they’re scrambling to come up with a defense.

It’s not working, and McAuliffe crashing and burning in Virginia is proof.

But Democrats will probably keep doubling down on their lies about CRT if the reaction thus far is any indication.