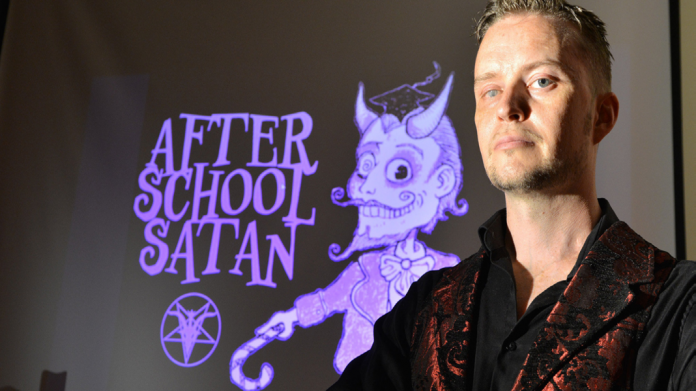 The Leftist gathering at the annual Sundance Film Festival is underway.

But one of the Hollywood crowd’s favorite entries got smacked down for what it said about Trump and Vice President Mike Pence.

The film follows leaders of The Satanic Temple, including cofounder Lucien Greaves.

And Greaves is “really scared of Mike Pence.”

In the film, Jex Blackmore, the Satanic Temple’s then national spokesperson and Detroit Chapter leader, calls for the execution of President Trump.

Greaves ousted Blackmore from The Satanic Temple, but not because he disagreed with her sentiment.

The Satanic leader thought it would make his cult look bad.

The Daily Beast has the story:

Greaves, 43, has emerged as the most unlikely star of the 2019 Sundance Film Festival. He, along with the Satanic Temple—which he co-founded with Malcolm Jarry in 2013—are the subjects of the new documentary Hail Satan?, a film by director Penny Lane that’s had a surprisingly warm reception in Park City, Utah, deep in the heart of Mormon Country.

At the risk of revealing a “spoiler,” one of the most pivotal scenes of Hail Satan? concerns Jex Blackmore, then a national spokesperson for the Satanic Temple and their Detroit Chapter leader, calling for the execution of President Trump. Blackmore is one of Greaves’ closest friends; after her incendiary statement, however, he says he was left with no choice but to kick her out of the Satanic Temple.

“When we say that somebody was removed for threatening execution on the president, that’s not to say that anybody in our group would cry if Trump died from choking on a ham sandwich tomorrow,” Greaves tells me. “We wouldn’t say we ‘lost a great man’ or anything like that—nobody feels that way. But because we’re publicly Satanists, we’re very vulnerable to accusations, and we’re a grassroots movement that can only finance so much of our litigation, and so much of our legal defense. If there’s a concerted effort by the state to shut us down, it might be tough to keep up with legal bills.”

This isn’t the first time the Left has made league with the Satanist Temple.

In 2018, the Democrat Secretary of State in Illinois, Jesse White, allowed the Satanic Temple to install a display in the rotunda of the State Capitol – spitting in the eye of Christians in Illinois.

What do you think? Do anti-Trump Satanists have a good reason to fear Mike Pence?