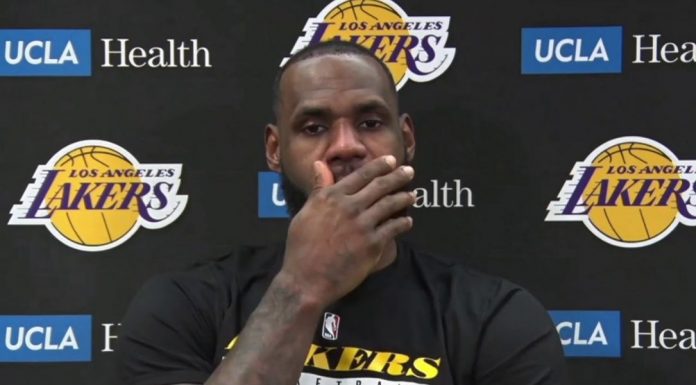 LeBron James is convinced that the world wants to hear his every thought.

He continues to tweet his opinion on things as if the world is looking to him for his expert advice.

And after his most recent tweet, one of LeBron’s handlers really should consider taking his phone away.

LeBron has interjected his extremist beliefs via Twitter into politics, sports, and any other subject he believes the world wants to hear his opinion on.

Most recently, the NBA star shot off a threatening tweet to the cop involved in the Ma’Khia Bryant incident.

He ended up deleting the tweet after the Twittersphere slammed him for not knowing all the details of the altercation before opening his mouth.

Now it seems LeBron wants to make sure everyone knows that he’s a great team player and a fantastic scorer.

After the news was released that Steph Curry won the NBA’s 2020-21 scoring title, LeBron took to Twitter to let everyone know that he’s the only player in league history to average at least 25 points per game for 17 seasons.

LeBron’s tweet to his millions of followers included a photo of his stats and said, “Since I was 19 years old! And I’m a pass first guy. Always been. That’s why I’m never mentioned with the greats of scoring, huh?? That’s perfect cause I’d rather keep it that way.”

So, if you’d rather not be listed with the greats, why are you tweeting about it?

The idea that he needs to remind the world that he is an amazing team player speaks volumes of the four-time NBA championship athlete.

Sounds more like LeBron doesn’t want to admit that Steph Curry might be better than him on offense.

Professional athletes and the Hollywood elite truly hold themselves on such a pedestal that they believe the world doesn’t just want to hear their opinions but that they need their opinions in order to better live their lives.

Unfortunately, the vast majority of those athletes and celebrities are left-wing extremists who are brainwashing people with their communist beliefs.

It’s people like LeBron James that make everyday folks turn off their TVs.