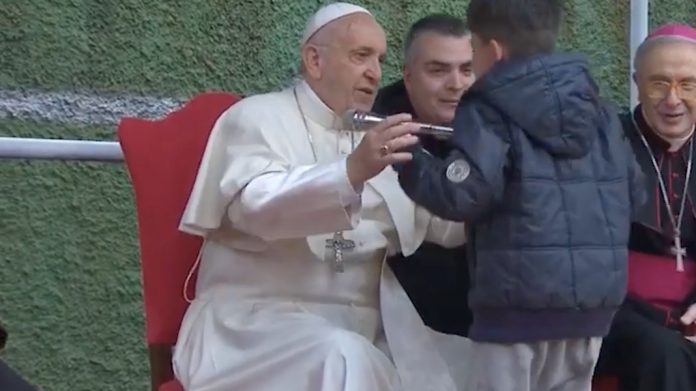 Catholics are speaking out against Pope Francis’ liberal agenda.

He seems dead-set on pushing the church to the far-left.

And a top Catholic leader just accused Pope Francis of a crime that will leave you speechless.

No figure in the Catholic Church is more known for speaking out against Pope Francis than Cardinal Raymond Burke.

Burke, an expert lawyer in Canon Law, has become the leading figure in the traditional wing of the Church fighting back against Pope Francis in his attempts to liberalize the Church.

This week he took things to a new level, accusing the Pope of using “absolute power” in an attempt to “eradicate a liturgical discipline” of the Catholic Church after he put out an order restricting traditional Latin Mass.

Burke, noting his own “intense bond” with Latin Mass, called Pope Francis’ move “severe and revolutionary action” that leaves him with a sense of “profound sorrow.”

Pope Francis’ decision was by his definition of the Modern Mass, or Novus Ordo Missae, as the “unique expression of the lex orandi of the Roman Rite,” declaring that bishops hold “exclusive competence to authorize the use of the 1962 Roman Missal in his diocese.”

In short, the order states that parish churches are not authorized to celebrate the traditional Latin Mass.

Cardinal Burke responded stating that Latin Mass was “never juridically abrogated,” nor is it permitted for a Pope to pretend to wield “absolute power” to “eradicate a liturgical discipline.”

He adds that the power enjoyed by the Pope is only that which is “necessary to defend and promote the doctrine and discipline of the Church,” and therefore cannot be misused to attack the same faith.

“As every valid celebration of a sacrament, by the very fact that it is a sacrament, is also, beyond any ecclesiastical legislation, an act of worship and, therefore, also a profession of faith,” Burke said.

He additionally adds that traditional masses are not something that can be excluded from the “valid expression of the lex orandi.”

“It is a question of an objective reality of divine grace which cannot be changed by a mere act of the will of even the highest ecclesiastical authority.”

Many in the Church see Pope Francis’ move as yet another attack on traditional Catholics.

And considering that Cardinal Sarah was not secretive about his concerns over Pope Francis, it is clear what the Pope meant.