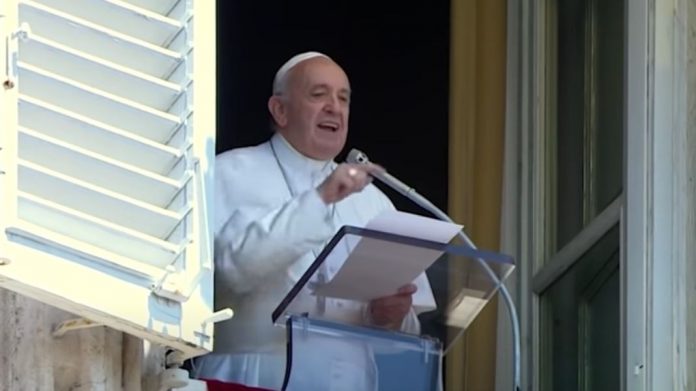 His far-left pandering seems to have no end.

And a top Cardinal just turned on Pope Francis with a demand he is sure to hate.

Since taking power, Pope Francis has been pushing the Catholic Church steadily to the Left.

He has downplayed the importance of fighting abortion, backed the Marxist Black Lives Matter movement, and even thrown his support behind same-sex unions.

These are all the public fights that people have seen.

But behind the scenes he has also been in a war with the traditional factions of the Catholic Church.

Just last month he accepted the resignation of Cardinal Sarah of Africa, who is perhaps the most well-known outspoken official in the Church.

When a Cardinal turns 75, it is custom to send a resignation letter to the Pope, but it is almost never accepted if the Cardinal requests it not to be.

So it was clearly a slight to Cardinal Sarah, and other traditional Catholics.

And just this month he has doubled down in that fight against the traditional wing of the Church.

In a shocking move, he has banned individual masses at St. Peter’s Basilica in Vatican City.

With 45 altars and 11 chapels in the Vatican, it has long been a practice for priests to hold smaller private masses at the different altars.

The Vatican memo prohibiting individual masses is in “direct violation of Church law” according to Cardinal Raymond Burke.

Burke stated that in a fiery letter demanding the memo be revoked.

The traditional Cardinal states that it “unjustly conditions the primary duty of the individual priest to offer the Holy Mass daily for the salvation of the world (canon 902).”

He states that not only is it in violation of Church law, but it is made on a false premise, stating that priests never offer Holy Mass alone, as the angels and saints assist at every offering of the Holy Mass.

In reality, this is Pope Francis’ attempt to have stricter control over the services occurring in the Catholic Church.

And it is largely the opposite of what one would expect at this time, with Pope Francis ringing the alarm bells on coronavirus.

He is forcing more people into a single space for Holy Mass, instead of sticking with the tradition that has been in place for centuries.