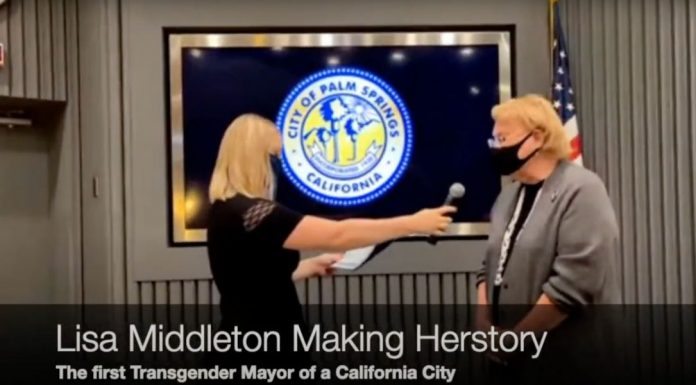 President Joe Biden has installed some of the most incompetent, corrupt, and downright vile government officials ever in his administration.

Democrats couldn’t care less about any threat to the country as long as it keeps with their narrative.

And now a top Biden admiral and nuclear aide are celebrating this one jaw-droppingly dangerous theft.

This is Sam Brinton.
HE is Joe Biden's latest hire for the Dept of Energy.
I shit you not. 🤦 pic.twitter.com/gLL3Xnwm0E

The pair are the first transgenders and admitted fetishists in government that Joe Biden appointed to the high levels on his cabinet.

Levine and Brinton are likely celebrating one city’s “gift” to transgenders after one the first transgender mayors was voted into office in Palm Springs, California and announced a jaw-dropping theft of taxpayer dollars.

Palm Springs Mayor Lisa Middleton is giving back to the gender-dysphoria movement that put her in office in an insanely unconstitutional way.

It’s the era of the transgender.

All the best and brightest women are now men.

"Admiral" R. Levine tells it like it is pic.twitter.com/gz0QZi9JE8

And so was Palm Springs Mayor Lisa Middleton.

Middleton is the city of 50,000 residents’ first transgender male.

Now, Middleton and Palm Springs’ City Council have just unanimously passed a new law guaranteeing up to $900 per month to residents in “free” income – as long as the residents are transgender or non-binary.

The law is in direct opposition to the 14th amendment of the United States Constitution that dictates equal protection under the law.

Nevertheless, as Fox News reports, the new law provides $200,000 to woke non-profit DAP Health and Queer Works to design the programs for those suffering from gender-dysphoria.

But instead of getting the confused mental help they need, the non-profit will give them “free” money, courtesy of taxpayers.

“They can spend the money however they want — no strings attached,” Rantz said. “The only rule at this point is that the recipients have to be transgender or genderless.”

How does someone prove they are transgender or non-binary?

Well, they just have to say it — after all, not even the newest Supreme Court Justice herself Ketanji Brown Jackson proclaimed during her Senate Confirmation hearings that she’s not qualified to define male or female.

Beyond the obvious unconstitutionality of the law, there is no evidence that universal basic income actually helps cure poverty.

“Much like the people it’s supposed to help in Palm Springs, guaranteed income presents as a good idea — it’s not actually a good one and all the data seems to point out it doesn’t quite get us to the point of defeating poverty in a way that’s efficient with the use of funding,” Rantz said. “It’s just too expensive.”

In recent years, Palm Springs has become a tourist hotspot destination for the LGBTQIA++ community.

Meanwhile, transgender Mayor Lisa Middleton is obviously only concerned with looking out for people like him.