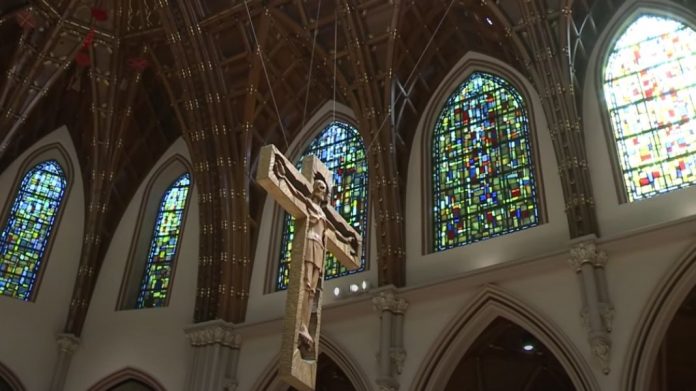 The Church got rocked by more disturbing news.

It couldn’t have come at a worse time for Christians.

But a prominent priest delivered a jaw-dropping lesson about the new “meaning” of Christmas for Christians this year.

Christmas is supposed to be about joy and celebrating the birth of Jesus Christ.

But to some faith leaders that has all changed.

Because despite The Word of God imploring us all to “fear not” 365 times, COVID apparently changed the meaning of Christmas for a prominent priest who went on live TV and said you shouldn’t be allowed to worship on Christmas if you hadn’t been vaccinated.

But in all of his time in front of the camera on national TV, he has never said something so dumb as what he uttered on CNN just before Christmas.

Father Beck claimed that only the vaccinated should be allowed in church to worship during Christmas.

Beck even carried that message to Twitter boasting, “Yep. I said it. I don’t think unvaccinated people should be gathering in churches for Christmas Eve / Day Masses. “Love thy neighbor,” says the Savior.”

Yep. I said it. I don’t think unvaccinated people should be gathering in churches for Christmas Eve / Day Masses. “Love thy neighbor,” says the Savior. ⁦@EricaRHill⁩ ⁦@jimsciutto⁩ ⁦@NewDay⁩ @cnn pic.twitter.com/3iCghHpV4I

But instead of urging viewers to come together and join in fellowship and worship on Christmas, Beck encouraged fear and division.

The headline on CNN’s graphic even urged Beck to give the right answer – “How We Can Come Together Such Polarizing Times.”

Christmas has united the world in some of its most divisive times.

Many have heard the story about Christmas Day in 1914 in France.

What came to be known in history as the Christmas Truce, soldiers in the middle of a pitched standoff during World War I laid down their arms and united in several hours of peace in the name of Christmas and celebrating the birth of Jesus.

Well somehow the message of Christmas that has resonated for centuries is now lost in our society’s great delusion over COVID.

Now we have prominent religious leaders gleefully stating that the unvaccinated should not be allowed to worship in Chirst’s names during Christmas.

Sadly, a man some call a religious leader tried to use Jesus’ love and compassion for others to justify keeping the unvaccinated out of Church on Christmas.

Has Father Beck ever opened up the Bible?

Did he forget that Jesus encouraged his disciples to help others and spread The Word, even to those cursed with leprosy?

Maybe Father Beck forgot that whole thing about Jesus cleansing the lepers of his sickness rather than running away and shunning the sick.

Recent studies are finding that the vaccines are more likely to lead to catching the Omicron variant and have a negative efficacy against the new variant.

This study shows that after three months the vaccine effectiveness of Pfizer & Moderna against Omicron is actually negative. Pfizer customers are 76.5% more likely and Moderna customers are 39.3% more likely to be infected than unvaxxed people. https://t.co/wPgAwG8BW3 pic.twitter.com/3Oh3IJSVIk

Nothing in what Father Beck stated is either biblical or logical.