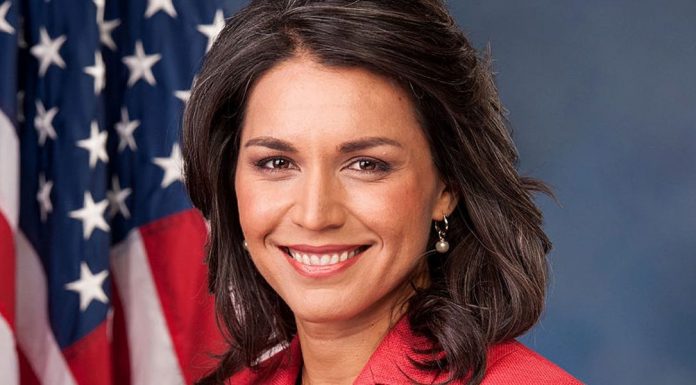 The Republican Party is full of cowardly elected officials too afraid to speak up on many important issues.

With a few exceptions, they won’t even touch the issue of left-wing racism against white people.

But a major Democrat just called out anti-white racism more bravely than 95% of Republicans.

The Democrat Party is ramming the idea that white people are evil down the throats of America.

They are pushing ideas like “Critical Race Theory,” which claims that all white people are racist, simply by the color of their skin.

If they have their way, this will be taught in every school and workplace in America.

This hatred for white people is only getting more extreme by the day.

Chicago Mayor Lori Lightfoot took it to an extreme, and in recent days announced that she will no longer accept interview requests from reporters who are white.

Many figures spoke out, but were careful in their wording out of fear of being called racist themselves.

Democrat Rep. Tulsi Gabbard wasn’t afraid of that when she responded by stating that her move was “blatant anti-white racism.”

“Mayor Lightfoot’s blatant anti-white racism is abhorrent. I call upon President Biden, Kamala Harris, and other leaders of our country – of all races – to join me in calling for Mayor Lightfoot’s resignation. Our leaders must condemn all racism, including anti-white,” Gabbard wrote.

Mayor Lightfoot's blatant anti-white racism is abhorrent. I call upon President Biden, Kamala Harris, and other leaders of our county—of all races—to join me in calling for Mayor Lightfoot's resignation. Our leaders must condemn all racism, including anti-white.

Her statement gets to the core of the issue.

The left has a strong anti-white bias.

And anybody who calls out the issue is called racist themselves.

Gabbard was viciously attacked for pointing out the anti-white nature of Lightfoot’s decision.

These called are just another door for them to continue such and @TulsiGabbard knows that very well https://t.co/K2csdbrec4

But Gabbard almost certainly doesn’t care about the attacks being leveled against her.

She has been attacked by the Left many times due to her anti-war stance.

Gabbard has called out major figures in the Democrat Party for their corruption, and support for never-ending wars abroad.

Hillary Clinton even claimed that she is a “Russian asset.”

While on a podcast, Clinton claimed that Republicans were “grooming” Gabbard as a spoiler candidate in the 2020 election.

“I’m not making any predictions, but I think they’ve got their eye on somebody who’s currently in the Democratic primary and they’re grooming her to be the third-party candidate,” Clinton said.

She continued, clearly alluding to Gabbard, “She’s the favorite of the Russians. They have a bunch of sites and bots and other ways of supporting her so far and that’s assuming Jill Stein will give it up because she’s also a Russian asset.”

Gabbard responded by ripping Clinton, “Great! Thank you, Hillary Clinton. You, the queen of warmongers, embodiment of corruption, and personification of the rot that has sickened the Democratic Party for so long, have finally come out from behind the curtain.”