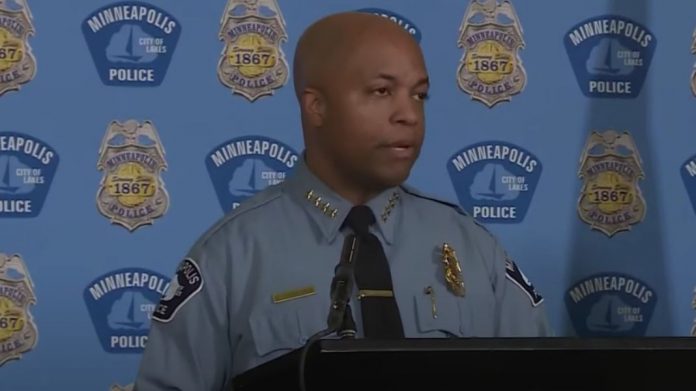 The Left isn’t even hiding the fact that they hate the police.

And now their hatred is even making the Left turn on their own kind.

A library was forced to apologize after they used the thin blue line to promote a police hating event.

No group has caught more hell from the Left over the past several years than those who serve to protect us.

Everytime someone is shot by the cops, the Fake News Media races to find out their race.

And if it’s a black man you can count on them being more worried about turning the world against the cop and creating a narrative of racial divisiveness rather than looking into what exactly happened.

If police officers sometimes have to make a quick life altering decision but when they do, the media jumps on to push their political narrative.

It doesn’t even matter who or what the race or gender was of the person police were protecting.

One poor Columbus police officer learned that in April when he had to make a quick decision whether or not to shoot a black girl about to stab another black girl to death.

Video of the police involved shooting from earlier today in Columbus, Ohio that resulted in the death of a 16 year old girl. pic.twitter.com/zvhIR51trT

The Fake News Media and even the White House turned on the cop and made the situation out to be about race.

Absolutely disgraceful: @PressSec just responded to the Columbus police shooting by demonizing law enforcement and making the girl shot WHO WAS LUNGING WITH A KNIFE sound like an innocent child.

She straight-up wants a race war in this country. pic.twitter.com/8WdTezaUPM

The Left hates anything that puts police officers in a good light.

Now news from Northwestern University in Illinois shows the Left has taken that hatred to another level.

Northwestern’s Emeriti Organization – a group of retired Leftist professors from the university – recently hosted a public forum on police brutality and how to change it.

A social media event page for the forum read “Are police abuses endemic to the system? What are the realistic prospects for reform?”

The event was being held at a public library in Evanston, Illinois where Northwestern University is located so it’s almost guaranteed the government library employees are themselves raging leftists.

But the library committed a grievous sin for anyone on the Left.

The library used the thin blue line flag to promote the forum.

Instead of telling the mob to pound sand, the library quickly issued an apology which read:

“We acknowledge the harm this image has caused our community, particularly for those who identify as black, indigenous, or POC. The library is committed to identifying, understanding, and rectifying our injustices past and current, as well as developing anti-racist policies and procedures that promote equity.”

With the Left openly demonstrating their hatred for brave police officers time and time again, it’s no surprise police forces were losing officers even before the Left’s “Defund The Police” movement and Joe Biden and the Democrats’ vaccine mandates.