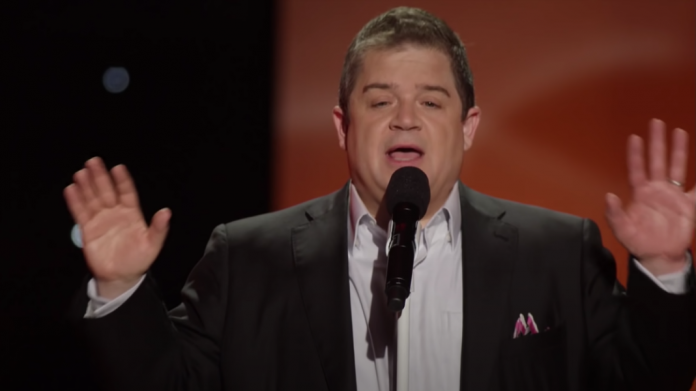 They are used to having everything handed to them on a silver platter.

And a liberal Hollywood figure’s hissy fit over vaccines will make you fall out of your chair laughing.

Of all the left-wing celebrities, few are as radical as rarely-funny comedian Patton Oswalt.

Along with supporting Joe Biden, he also regularly shows his support for the violent left-wing terrorist organization Antifa, even smearing World War II veterans by insinuating that they were actually fighting for Antifa, not their country.

Now he is upping the ante again, and just announced that he is cancelling comedy shows in Florida and Utah after the venues where he was scheduled to perform refused to comply with his demand to mandate the coronavirus vaccine for attendees.

In a social media post, Oswalt said the venues in question lack “sanity.”

“The good news is we’re keeping everyone who comes to these shows safe and healthy because the numbers are going up,” he said. “Now the bad news, of course, is there are five venues on the tour that are not complying with this.”

He continued: “This difficult decision was made due to the rising numbers of COVID cases and also because I have an ego, but my ego is not big enough to think that people should die to hear my stupid comedy. So hopefully, hopefully, in the future we can rebook those when sanity holds sway again. But this sucks, I was really looking forward to Florida, to Salt Lake City.”

Naturally, he was widely mocked for the decision.

Sen. Ted Cruz responded to the news with a slam on Oswalt, saying “Both of his fans were disappointed.”

One Twitter user speculated that Oswalt actually cancelled the shows because nobody bought tickets:

With as conservative as Florida and Utah are, it wouldn’t be shocking if he couldn’t fill enough seats, and instead used coronavirus as cover to back out without having to admit to the lagging ticket sales.

The fact that he chose Florida is especially suspect.

The left is already using this cancellation to attack DeSantis, with one popular left-wing Twitter user stating that “Patton Oswalt is LITERALLY more concerned with the health of the people of Florida than Florida GOP Gov Ron DeSantis.”

Culture Watch News will keep you up-to-date with any developments in this ongoing story.