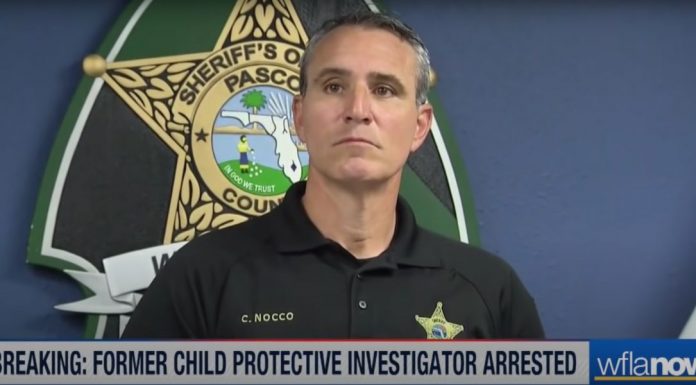 Leftists are bound and determined to claim total power.

The FBI raid on Mar-a-Lago was sickening.

And a “humiliating perp walk” went down in Florida that will leave you furious.

The culture war is continuing to rage in Florida after a school blows off Governor Ron DeSantis.

And you won’t believe what happened to one father.

Florida Governor Ron DeSantis has worked hard over the past few years to shore up parents’ rights in his state.

But now there’s fresh proof leftists will go to any length — even openly violating the law — to indoctrinate our children.

Florida mom Rebecca Yuengling started butting heads with her local school when they persisted in giving her 14-year-old daughter inappropriate surveys to complete.

“The reason I was so vocal was because they were having my kid fill out surveys that were sexual in nature and then telling them to keep it a secret,” she said.

Teachers in the school were also pushing the gender confusion agenda and Critical Race Theory.

After Yuengling complained, her daughter’s history teacher retaliated by giving the class a survey on gender ideology and informing students that it would count toward their grade.

When the mom reminded the school that Ron DeSantis signed a law prohibiting teachers from “enticing or coercing students to keep information from their parents” the county school superintendent had the gall to kick the teen out of her school.

Additionally, the parents were informed their younger son also won’t be allowed to attend his local public high school.

A federal lawsuit filed by the girl’s parents says the girl was sobbing and “visibly upset” during a “humiliating perp walk” when she was escorted off school grounds in front of her friends.

The conservative Christian family told The Epoch Times things only got worse after they filed the lawsuit.

Richard Yuengling, the girl’s father, soon found himself at the center of an “internal affairs investigation” at the courthouse where he works as a bailiff.

According to court documents he’s in all kinds of trouble for filing the lawsuit in his daughter’s case during his lunch break when he was in uniform.

He’s being accused of wearing his uniform for personal gain or influence — as if the courthouse employees wouldn’t have recognized him if he’d been wearing a polo and baseball cap instead of his uniform.

“I’m just a dad trying to stand up for my kids,” said Yuengling, who has worked for the sheriff’s department for the 22 years since he left the Navy. “I couldn’t believe they were doing this to me.”

He told The Epoch Times he’s been demoted to jail duty and was informed by a sheriff’s captain that the insulting move came “from higher up.”

His lawyer filed a lawsuit against the county pointing out that other officers have gotten away with far more serious violations of the rule including testifying at their own divorce proceedings in uniform.

This isn’t the first time Pasco County’s school superintendent and sheriff have been caught pulling something dirty.

School Superintendent Kurt Browning is a former Secretary of State who was investigated back in 2021 for providing Sheriff Chris Nocco with students’ grades and discipline history so the sheriff could identify kids that might fall into a “life of crime.”

Nocco is apparently such a control freak he’s been slapped with lawsuits for obsessive behavior using his “Intelligence-Led Policing” program to pull crazy stunts like going after residents who forget to put their house number on their mailbox.

Nocco, Browning, and the Yuenglings are all Republicans, but other Republicans like Congressman Matt Gaetz (R-FL) have asked DeSantis to kick Nocco out of office.

Apparently, Florida has its own swamp.

And the RINOs are more trouble than the alligators.