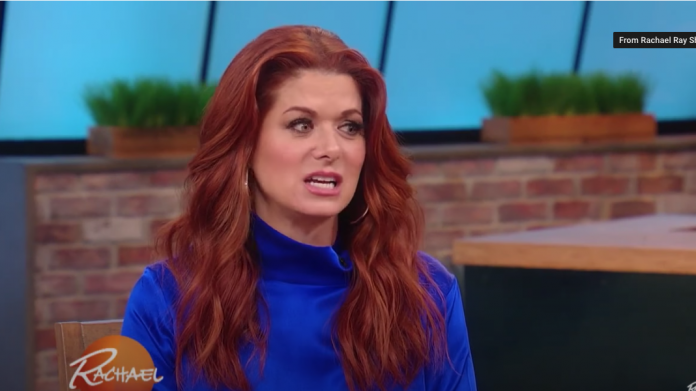 Hollywood liberals want you to believe there is racism everywhere in society.

They are so desperate that they create fake hate crimes to fit the narrative.

And one Hollywood star just got caught in a hate crime hoax that could change the Georgia election.

In most of America, racism is something that isn’t thought of much.

While there was once a big problem of racism in America, today that doesn’t really exist.

But coastal elites desperately want that to be true, so they can further look down on people in middle America.

Hollywood star Debra Messing, who is most known for her role as Grace Adler on Will & Grace proved that with a fake claim lobbed at Georgia Sen. David Perdue.

And Democrats are so desperate to win that they are making up outright lies.

Messing made a post online claiming that Perdue flashed a “white power” hand sign for a picture during an October campaign rally in Georgia.

The picture shows Perdue standing next to two campaign interns who are holding up three fingers.

Messing is claiming they are flashing the “okay” sign, which the Left has claimed stands for “white power.”

“Flashing the #WhitePower sign on the campaign trail in #Georgia,” the actress tweeted. “Is this what you want #Georgia? You voted AGAINST white supremacy in Nov & we need you to do it ONE MORE TIME to fire this guy and #KKKKelly.”

That claim on its own is ridiculous, and the “white power” claim is simply a lie from the Left used to create racism where there was none.

But it gets even worse.

The reality behind the picture is that it was taken to celebrate the two campaign interns making 3,000 voter contacts on the campaign trail, which is why they had three fingers up.

Even worse for Messing is that the first person to post the picture was a black campaign staffer, who was congratulating the two young interns.

The real reality of this is that the okay sign simply means what it implies, “okay.”

There are pictures of virtually every major figure using the sign, which is why the Left made up a fake meaning, so they can smear anybody they don’t like, and ignore when anybody they like does it.

Someone was telling me that the OK sign is a white power symbol,

so I showed them this picture,#Obama #ok #okay #politics #news pic.twitter.com/vptnsvS45p

Messing so far hasn’t taken down the picture, and seems to stand by her disgusting lie.