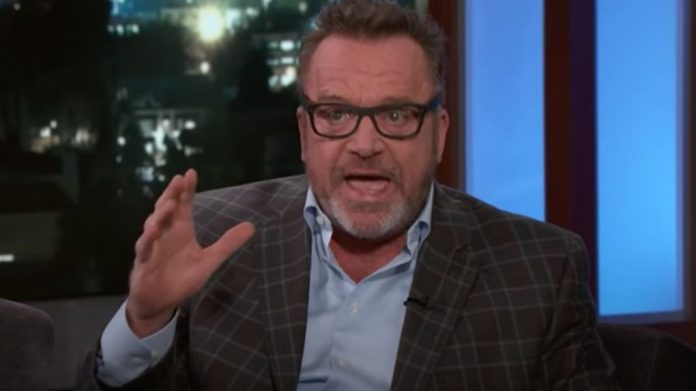 The Left is known for being hypocrites.

Hollywood elites are the most extreme example of this.

And one Hollywood actor just announced an armed uprising against the police that could get bloody.

While Hollywood elites oppose regular people having the right to defend themselves, they would never give up their own protection they gain from armed guards.

Hollywood actor Tom Arnold took this even further in an unhinged exchange on Twitter.

It all began with a post about police protecting the White House from rioters, which somebody else wrote:

“Completely unmarked officers in riot gear holding protesters blocks away from the White House. No badges. No insignias. No name tags. Nothing. Refused to tell us who they’re with.”

Arnold responded to the Tweet by first laughably claiming he supports the Second Amendment, before claiming that he and other “white liberal men” should take up arms against the police in this situation.

“2nd Amendment is for everyone including black men with long guns but it’s fucking time for us white liberal men to stand up for our brothers & sisters,” tweeted Arnold. “Borrow our dad’s hunting rifles & go nose to nose with Trump’s gang of misfit tools.”

“Let’s do it [Rob Reiner],” added Arnold, who tagged fellow actor Rob Reiner’s Twitter account at the end of his comments.

This isn’t the first time the actor has called for violence, last year he fantasized about killing President Trump, stating he was “looking forward to the day I’m standing over him wearing my bullet belt & safari khakis, my cartoon sized Daniel Boone buck knife in one hand his teeny tiny tail in the other.”

In a Tweet about protests, he suggested organizing protests at his son’s school, stating that, “Next is protesting Barron’s private school.”

And that is far from the most disgusting thing Hollywood has said about Barron Trump.

In a now-deleted Tweet that came before Arnold’s about Trump, Hollywood actor Peter Fonda called on removing Barron Trump from his family, and putting him in a cage with pedophiles.

Arnold is completely unhinged, and a danger to society as his Tweets prove.

But because he is a Hollywood elite, he can get away with these extreme statements.

Do you think Secret Service should arrest Tom Arnold?