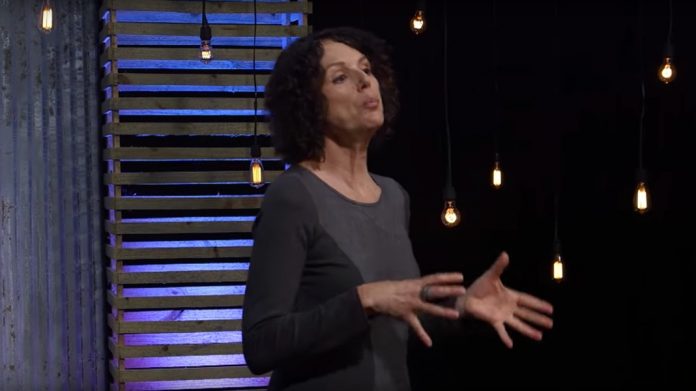 Democrats have bent the knee to the radicals.

And a far-left radical got paid $12,000 for something unthinkable.

Robin DiAngelo is the preeminent “woke” grifter in America.

The author of the detestable book White Fragility has probably raked in millions at this point by peddling the notion that all white people are racist and America is foundationally white supremacist.

And DiAngelo just got paid a cool $12,000 for a Zoom lecture at the Ohio State University.

Even more absurd, DiAngelo added language to her contract that closed the lecture to dialogue for fear of criticism.

“Robin DiAngelo, one of the most prominent critical race theory (CRT) peddlers and the author of the 2018 book ‘White Fragility,’ was paid $12,000 in the by Ohio State University to lecture on white privilege, while contractually concealing her work and avoiding dialogue…According to her contract, DiAngelo does not permit a live audience question and answer (Q&A) session while giving a keynote. Debate is not in the cards. ‘On a topic as charged as racism, opening the floor to the audience allows for very problematic dynamics (e.g. long-winded speeches, convoluted questions, debates),’ the contract claims.”

DiAngelo, who once admitted to tensing up when being in rooms with black people, has somehow turned her far-left neurosis into a cottage industry.

She routinely appears on corporate-controlled press programs to peddle her nonsense.

Despite her books and lectures being eviscerated, she remains a central figure on the contemporary Left.

DiAngelo’s writing and teachings are the epitome of the “soft bigotry of low expectations,” but her ideology allows white progressives to maintain moral superiority without actually having to give up power.

Taxpayer dollars at institutions like Ohio State are funding DiAngelo while she poisons the well with her “woke” insanity.