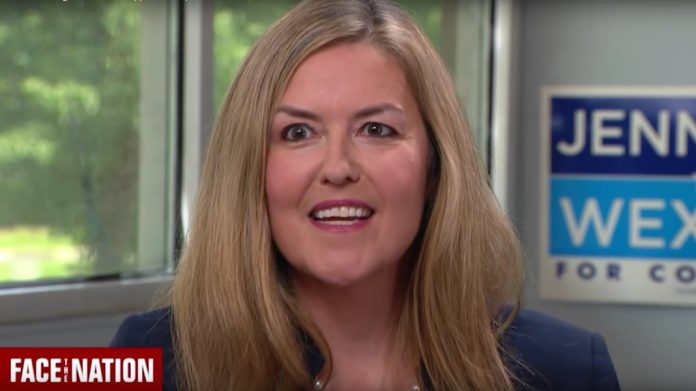 Barack Obama lit up the White House in the rainbow flag after the Supreme Court’s ruling on homosexual marriage in 2015.

Many Americans were outraged that Obama used the image of the White House to push pro-LGBT propaganda.

But now one Democrat just outdid Obama with this move.

As one of her first moves in office, she decided to hoist a transgender flag outside of her Congressional office on Capitol Hill.

Wexton said she’s displaying the flag because she has family and friends who are transgender.

But the truth is she’s just pandering to the Left’s obsession with identity politics.

Newly-elected Virginia congresswoman Jennifer Wexton is showing solidarity with the LGBTQ community by hanging a transgender pride flag alongside the official Virginia flag outside her D.C. office.

Narissa Rahaman, a regional field organizer for the Human Rights Campaign, shared an image of the flag on Twitter Thursday, which she said is the only office on the Hill with one. Rahaman also said Wexton told her the flag is there because of the community’s support.

The congresswoman, who is also an aunt to a transgender child, told the Washingtonian that she raised the flag in front of her office as a show of support for the transgender community.
…
Danica Roem, the first openly transgender woman to be elected to the Virginia state legislature, thanked Wexton for the supportive gesture on Twitter.

The trans flag is proudly & openly displayed next to the Virginia flag outside @RepWexton’s new office! She said to me, “Did you see the flag?! I think we’re the only office on the Hill with one.” To all her volunteers: the flag is there because of you & for you! Change is here! pic.twitter.com/s0iGgoxOgH

Since Obama’s election the Democrats have ramped up their identity politics nonsense.

They think they can win enough votes to keep them in office by putting everyone in a box and fooling Americans into believing they are victims.

This is flat out wrong.

Do you think Democrats’ identity politics strategy will come back to bite them?