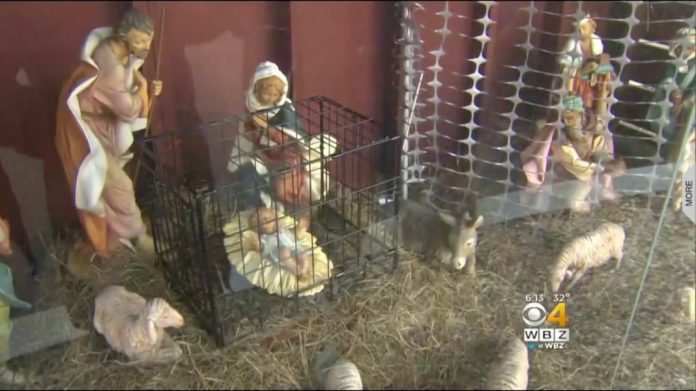 Liberal “Christians” are often more dedicated to their political beliefs than to Christ Jesus.

They will even twist the Scriptures to support their politics.

And this church just attacked the birth of Jesus with this crazy nativity scene.

In Massachusetts, a church has decided to put a twist on the nativity scene.

They depict Jesus inside a cage under a sign that reads “Peace on Earth?”

And there’s a sign pointing to the wise men who are beyond a fence that says “deportation.”

The church says the move is to start a “conversation” about immigration.

But the reality is they’re just using Jesus’ birth to attack President Trump and make a twisted political statement in support of open borders.

A church in Massachusetts has set up a nativity scene in which the baby Jesus is inside a small steel cage, under a banner that reads “Peace on Earth?”
The nativity scene at St. Susanna Parish in Dedham also has the three wise men barricaded from Mary and Joseph by a fence-like structure.

”Peace on Earth?” This nativity scene at St. Susanna Parish in #Dedham is hoping to shine a light on the topic of immigration. Details on #WBZ pic.twitter.com/2td865JnJF

The church says it is hoping to spark a conversation about how immigrants are being treated at the U.S.-Mexico border, the Boston Globe reports.

The church says they want to promote “peace and justice” in their community, but the move is overtly mocking the birth of Christ Jesus.

This is yet another example of how so-called “progressive” Christians would rather be loyal to their politics than to Jesus.

It shows what they truly value the most.

They value making a political point more than accurately sharing the Gospel.

This is nothing new for Social Justice Warrior Christians, however.

As we recently reported, Hillsong church is planning a live show where they depict the three wise men greeting Jesus at an inn where there is a lot of drinking and dancing.

If these Christians won’t take Jesus’ birth seriously, they ought to take His words from Matthew 7.

“Not everyone who says to me, ‘Lord, Lord,’ will enter the kingdom of heaven, but the one who does the will of my Father who is in Heaven”

What do you think about the nativity scene? Let us know in the comments below.