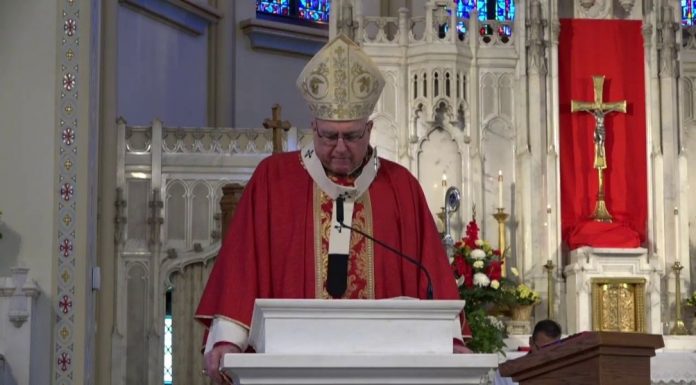 Joe Biden has predictably been given a free pass by everyone in the corporate-controlled press.

He’s hardly received any pushback at all outside of conservative media despite his troublesome executive orders.

But a Catholic bishop wants Biden to stop doing this one thing immediately.

Joe Biden has constantly called himself a devout Catholic.

The New York Times even wrote a nonsensical piece framing Biden as the most religious President in half a century.

It didn’t take long for Christians to point out George W. Bush’s faith and the fact that Jimmy Carter was a Sunday School teacher.

Now Kansas City Archbishop Joseph Naumann is calling on Biden to stop characterizing himself as a devout Catholic.

Naumann said in an interview, “The president should stop defining himself as a devout Catholic, and acknowledge that his view on abortion is contrary to Catholic moral teaching,”.

Biden has actually been denied communion in churches because of his pro-abortion stance.

Worse yet, Biden has drifted to the Left on abortion along with the rest of the Democrat Party.

The Democrats once argued that abortion should be “safe, legal, and rare,” but they’ve dropped their pretenses and engage in full-on worship of the barbaric practice.

New York legislators lit up the One World Trade Center pink in celebration of passing an abortion law that allowed for pregnant women to get abortions up to the point of birth for any reason.

Biden himself reversed his position on public funding for abortions in foreign countries.

Naumann continued, “When he says he is a devout Catholic, we bishops have the responsibility to correct him . . . Although people have given this President power and authority, he cannot define what it is to be a Catholic and what Catholic moral teaching is.”

Even leftist Pope Francis denounces abortion in the harshest of terms.

He advocates for open borders and climate activism and other progressive policy goals, but he has not budged one inch on abortion, much to the dismay of the Left.

Naumann added, “It would be a more honest approach from him to say he disagreed with his Church on this important issue and that he was acting contrary to Church teaching.”

Biden isn’t exactly known for his honesty, so nobody should hold his breath for that confession from him.