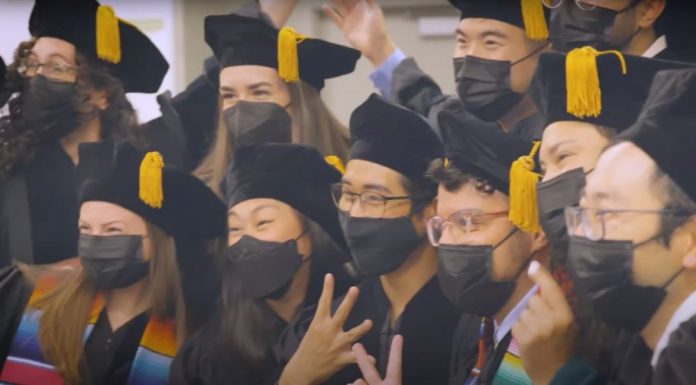 The medical profession used to be firmly grounded in the Hippocratic creed.

But today, even the medical field is being flooded with leftist activists.

And a batch of future doctors just pulled one sick stunt proving Americans are in a whole lot of trouble.

The Democrat Party has been hijacked by radical leftists dead-set on reshaping our culture and trying to change the very essence of what is accepted as right and wrong.

Recently, some 70 incoming medical students at the University of Michigan Medical School pulled a stunt proving the leftists’ efforts are paying off.

Out of a class of about 170 incoming medical school students, about 70 dramatically walked out on their own induction ceremony simply because a pro-life medical doctor was speaking at the event.

Naturally, they had someone on-hand to capture their immature antics so it could be spread all over social media.

Even The Huffington Post noted that Dr. Kristine Collier didn’t even address abortion in her speech.

But in the current, “cancel culture” atmosphere, death-obsessed leftists can’t even stand the sight of anyone who disagrees with them.

“The overall message that the students wanted to push was that reproductive rights, abortion, is health care,” An activist, who was there to “support” an incoming student, told NPR. “Reproductive rights for anyone who is able to give birth are incredibly important and should be something that’s allowed to everyone in the country.”

Funny how believing the right to life should be protected for everyone in the country has been pushed to the side.

Leftists got all bent out of shape last month after Collier was quoted in The Pillar, a Catholic newsletter.

She argued that pro-life practitioners are advocating for “expansion of rights for some of the most vulnerable members of the human family.”

“There is no more beautiful testament to the growth of society when it extends rights to a vulnerable population that did not have them before,” Collier said.

For all they like to yammer on about “progress,” leftists have zero interest in true growth and developing a more ethical society.

Collier poked them for that immature approach in some tweet earlier this year.

“Holding on to a view of feminism where one fights for the rights of all women and girls, especially those who are most vulnerable. I can’t not lament the violence directed at my prenatal sisters in the act of abortion done in the name of autonomy,” she wrote. “Liberation that costs innocent lives is just oppression that is redistributed.”

As a faculty member at the school, Collier is likely to face some hostile classes.

Prior to the ceremony, a group of students tried to get her pulled from the program.

“While we support the rights of freedom of speech and religion, an anti-choice speaker as a representative of the University of Michigan undermines the University’s position on abortion and supports the non-universal, theology-rooted platform to restrict abortion access, an essential part of medical care,” the students wrote.

Organizers claim the petition was signed by more than 300 of the 785 students enrolled in the school.

And just like good little leftist zombies, the baby-killing supporting med students didn’t react well when their petitions to have Collier dumped were ignored.

Incoming medical students walk out at University of Michigan’s white coat ceremony as the keynote speaker is openly anti-abortion pic.twitter.com/Is7KmVV811

The proportion of students who support killing unborn babies for any reason and are also willing to make a huge fuss over the presence of someone who disagrees with them is truly frightening.

Leftists have spent decades leaving their mark in schools — and that work is clearly paying off in their quest to destroy our society.